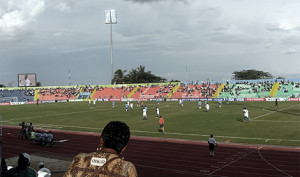 The Super Eagles are expected to stay in Calabar for the final match of their World Cup qualifying series despite the re-opening of the National Stadium, Abuja.

Over the last two years, with the Abuja Stadium pitch in disrepair and overgrown by weeds, the Cross River State capital has hosted the majority of Nigeria’s international fixtures.

But the newly renovated National Stadium was re-opened on Tuesday and there have been suggestions that the NFF might move the Super Eagles back there in November when they host Ethiopia.

A top official of the NFF said that that scenario was very unlikely.

“As far as the federation is concerned at this moment, there is no reason to change the venue,” the official said. “If the NFF decides to bring the team to Abuja and anything goes wrong, people will say it is because the venue has changed.

“In any case, it will be the height of ingratitude to the government and people of Cross River State who took the team in and hosted them at a time when nobody else wanted to.”

The official went on to add that the only way the match would move from Calabar, is if the players specifically request it.

“If the coach and players come out and say they want to play in Abuja, then the NFF would have no choice, but for now, the game will be in Calabar.”