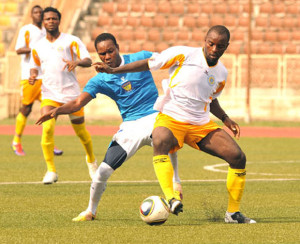 Enyimba International of Aba climbed to the top of the Globacom Premier League table in an incredible fashion, hitting Gombe United 3-0 at the Aba Stadium.
On a night 24 goals were recorded in nine matches of the Nigerian top flight, Ifeanyi Ede, Bishop Onyeudo and Emeka Nwanna ‘Ayaya’ ensured the the six time league champions claimed a fair share of the two dozen goals. Enyimba are tied on 45 points with defending champions Kano Pillars and Bayelsa United on the table but the People’s Elephant have superior goals advantage to sit top on the log. Kano Pillars have however played one game less.
In Warri, Musa Naghare grabbed a hat-trick in Warri Wolves 4-0 demolition of Kaduna United.Oghenekaro Etabo added the fourth as the oil city side cruized to the 6th spot on the log with 42 points. Dolphins of Port Harcourt suffered their worst defeat of the season following a 4-0 loss at Nasarawa United. Kadiri Ikhana recorded his first major win in an emphatic fashion as Stanley Eguma’s travelling party were left in deep thought.
Kelvin Njoku scored an own goal in the 55th minute, helping home Ajibola Otegbeye’s cross into his own net as ABS ran out 1-0 winners against Akwa United in Ilorin.