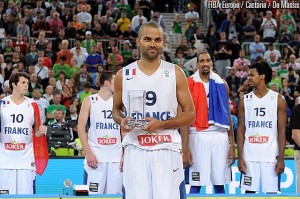 Boris Diaw, captain of France and vice-captain Florian Pietrus had the honor of lifting their first trophy of the Eurobasket championship held in Slovenia. Led by Tony Parker, well supported by Nicolas Batum, France beat Lithuania in the final, 80-66. If Batman finished top scorer of France in this mass encounter, France owes congrats to its leader Tony Parker.

The leader of the Spurs of San Antonio, in the image of the semifinal against Spain was the man of the Slovenian Euro. Rightly, TP was named MVP of the tournament. He appears naturally in the five majors of the tournament alongside Goran Dragic (Slovenia), Bojan Bogdanovic (Croatia), Linas Kleiza (Lithuania) and Marc Gasol (Spain).