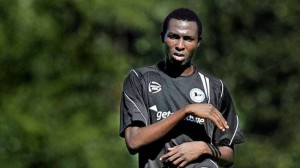 Ghanaian international Kwame Nsor has made his debut appearance on his return to French Ligue  2 side Metz in their goalless draw game against Clermont.
The 21 year-old striker has promised to work hard to command a regular play for his club to secure a call-up to the Black Stars. The Lanky striker joined Metz this summer as a free agent after terminating his contract with German outfit Kaiserslautem and is expected to play key role in their quest for qualifying back to the Ligue 1.
the former under 17 and Under 20 striker believe he is in a good form and is ready to make the neccessary impact for Metz
Nsor made his debut appearance coming as a substitute for Yeni Ngbakoto and has vowed to bang in more goals for his new side.