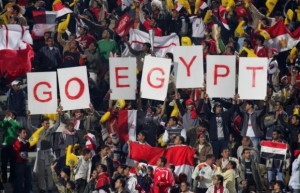 Egypt has finally break the jinx as they select a venue for the second leg game against Black Stars of Ghana.
Egypt have confirmed the 40,000 capacity Al Defaa Al Gawi Military Stadium in Cairo as the matchvenue for the return fixture of the 2014 FIFA World Cup playoffs in Cairo as the match venue for the return fixture of the 2014 FIFA World Cup playoffs against Ghana on November 19, Africatopsports can confirm.
Sports minister Taher Abu Zeid confirmed moments ago after forcing through a petition which gotsecurity clearance from defence minister Abdul Fattah El Sisi on Wednesday. The Ghana FA is yet to notify FIFA if they will feel safe to play at such an explosive place. The Pharaohs are eyeing their first World Cup appearance since 1990, while Ghana are seeking to reach the tournament for the third consecutive time, having reached the quarter finals in their last appearance in 2010.