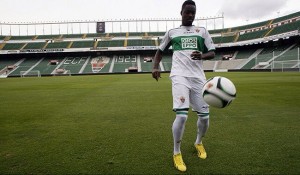 Ghana striker Richmond Boakye proved his prowess by scoring in Elche’s narrow 2-1 home defeat to giants Real Madrid on Wednesday in the Spanish La Liga.
Boakye Yiadom was transfered on loan from Juventus to Elche in Spain for the2013-14 season.
The Juventus loanee came off the bench to score the only goal for his side in their 2-1 home defeat against spanish giant Real Madrid.
Boakeye’s goal cancelled Cristiano Ronaldo’s 51st minute goal making it draw but Cristiano Ronaldo scored the match winner from the spot in the sixth minute of added on time.
Boakye grabbed the headlines on his debut by coming off the bench to score the leveller in stoppage time against Almeria in the opening fixture.
The 20-year-old  striker believe he has adapted to Spanish football and ready to make an impact in the La Liga.