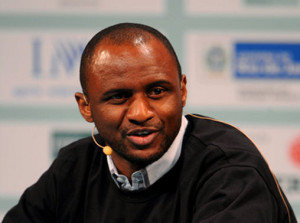 Retired French footballer of Senegalese and Cape Verdean descent Patrick Vieira disagrees with the England FA chairman Greg Dyke who recently said the national team players must be given more playing time in their club levels in the premier league to raise the standards in their national team than given foreigners more playing time in the Premier league.
Vieira who is currently the Manager of the Reserves squad at Premier League club Manchester City says England’s failures at major tournaments are down to coaching standards rather than foreign talent playing in the Premier League.
The  former France midfielder Vieira says: “The problem is deeper than just saying there are too many foreigners. The methods in England haven’t changed as much as the game has changed.“