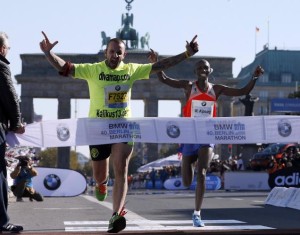 It is on Sunday that the world Marathon record was broken in Berlin. It is the Kenyan Wilson Kipsang who achieved the feat by dominating the race in 2h 03min 23 sec or 15 seconds faster than the previous record.

But yesterday, the world’s media are frustrated when it comes to board image upon arrival of the race of Kipsang.

One of the fans running was alongside the sportsmen. While Kipsang is close to the finish line, our troublemaker climbed the fence and crossed the line first at the astonishment of the Kenyan champion. According to reports, this individual was advertising for a website.