Yet another weekend where African international players have spread their talents. The award of this weekly overview returns to the Ivorian Gervinho. In two games, he scored three goals including two Sunday against Bologna with AS Roma. The Arsenal episode is completely forgotten. 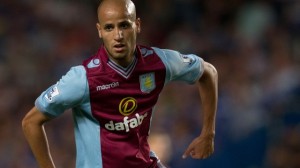 Bad weekend for the Manchester teams. United was defeated 1-2 at home against West Bromwich with a Stéphane Sessegnon still prosperous. The Beninese was the source of a beautiful goal from the former Marseille player Morgan Amalfitano.

City experienced the same ordeal against Aston Villa. Despite another goal by Yaya Toure (his 4th in 6 games), the Citizens were beaten 2-3. The Moroccan Karim El Ahmadi (photo right) has equalized for the Villans before goals by Bacuna and Weimann .

For the first time since his arrival at Chelsea, Samuel Eto’o has not played a game for the Blues. It was during Saturday’s London derby against Tottenham (1-1). 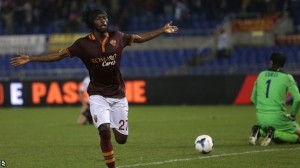 Betis can say thank you to Nosa Igiebor . The Nigerian was the only scorer in the match between his team and Villareal (1-0). A nice win against one of the teams in great shape this season.

Gervinho is in great shape. The Ivorian striker has not finished flying with AS Roma, club he joined this summer from Arsenal. Having opened his account in midweek, the former Lille has recurred this weekend. Two goals on individual achievements. Beside him, the Moroccan defender Mehdi Benatia also feels good. Second goal in two games. AS Roma crushed Bologna 5-0.

Germany (J7)
Borussie Dortmund has entertained again this weekend. A beautiful and clear 5-0 victory over Freiburg. If Pierre- Emerick Aubameyang has not scored (though holder), another African stole the limelight. The Senegalese Fallou Diagne was expelled after conceding a penalty for Freiburg. 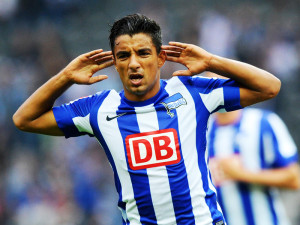 Tunisians were at the party with Hertha Berlin. Sami Allagui (pictured right) has completely turned the face of the game Mainz (his former club). He scored twice before his compatriot Ben Hatira Hanis adds a third for a 3-1 victory of the Berliners.

Back in the group after a knee injury , Kevin- Prince Boateng is immediately returned to the track in the Bundesliga . A new goal in the 3rd minute with a shot into the top corner for his Cameroonian team-mate Joel Matip to imitate him a few moments later through a head-butt. Unfortunately, Schalke 04 will concede a 3-3 draw after leading Hoffenheim with 3-1 .

Big performance of VFB Stuttgart against Eintracht Brunschwig. A 4-0 victory with a goal from the Guinean Ibrahim Traore.

The match of the 8th day of League 1 has kept all its promises. Reims and its Africans held the shock against Monaco. Kossi Agassa has saved his team again. Odair Fortes, Floyd and Prince Ayité Oniangue were very valuable in the game. Final score 1-1. 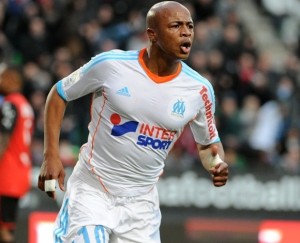 Nantes has not missed a clash in League 1 against its rival, Rennes (3-1). Victory for Canaris thanks to the efficiency finally found of the Togolese Serge Gakpé who celebrated his 100th. The former Monaco player had not scored in the elite league of France since January 2008.

First goal of the season for Andre Ayew (left). The Ghanaian has confirmed the 2-0 victory of Marseille against Lorient on Saturday.

Ismael Diomandé should not forget his first League 1 goal. The young Ivorian sent a hot shot in the cages of Landreau during the 2-2 draw of Saint -Etienne against Bastia.

Bordeaux still doesn’t win. And it must rely on its Malian for salvage. Led 0-1 by Evian Thonon Gaillard, the Girondins eventually equalize through Cheick Diabate.

Omar Daf can be happy. For his first at the head of Sochaux in crisis, the Senegalese coach hung the first three points of the season. Especially also because the young Congolese Cedric Bakambu scored the first goal against Valenciennes (2-0), which as a result goes into the depths of the rankings.