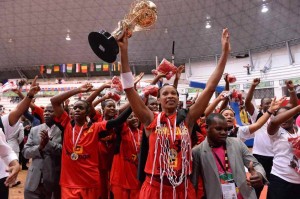 The 23rd edition of the female Afrobasket ended Sunday with the coronation of Angola. The 2011 African champion retained its title by defeating Mozambique, the host country in the final. Both teams will represent Africa at the next world championship of basketball, Turkey 2014.

Senegal finished third on the podium.

The Angolan captain Naceesela Mauricio keeps the MVP acquired in 2011. The 33 year old winger elected MVP in 2013 is logically part of the five majors of Maputo 2013.

Final ranking of the 2013 Maputo Afrobasket