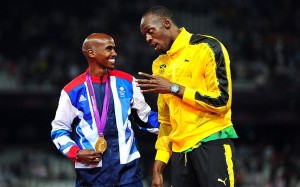 Mo Farah and Usain Bolt are on a 10-strong shortlist for the 2013 World Athlete of the Year award released by the International Association of Athletics Federations.
Farah did the 5,000m and 10,000m double at the World Championships in Moscow in August and also set a new British and European 1500m record in Monaco.
Bolt won three gold medals in Moscow, winning the 100m, 200m and 4x100m titles to become the most successful athlete in World Championships history with a career total of eight gold medals.