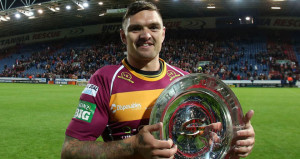 The Dewsbury born Scottish international rugby league footballer, Danny Brough who currently plays for the Huddersfield Giants in the Super League declared having been surprised by the Super League’s Man of Steel Award bestowed to him during a ceremony in Manchester.

This a third award for Brough after having won the Albert Goldthorpe Medal for the second time and named Rugby League Writers’ Association player of the year.

“I was pretty gobsmacked. There are many great players in the game and, for me to receive this many awards, it’s the best year I’ve had in my career by far,” Brough said before adding about his inescapable performance and results:“It’s probably the best I’ve played so that’s probably the reason I’ve got the rewards I’ve got.”