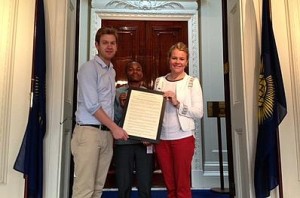 The use of sport as a tool for development is sometimes underestimated around the world, however with young people’s innate ability to identify with sport and its many valuable outputs, the Commonwealth have made a commitment to putting young people at the centre of sustainable development.

The Commonwealth has formed a Sport for Development and Peace (SDP) Youth Working Group, the group is made up of leading youth practitioners in the field of Sport, Development and Peace who have demonstrated a commitment to putting young people at the centre of sustainable development. Coordination is the responsibility of the Commonwealth Secretariat who have a role supporting youth networks and representative structures across the Commonwealth as well advancing the status and recognition of the role that sport can play in supporting broader development efforts across The Commonwealth. Ten practitioners from various backgrounds, representing organisations and institutions from across the Commonwealth were invited to form the initial working group which will open up into a wider network for young people pan Commonwealth to feed into. Members where identified based on their experience, expertise, understanding and passion for SDP. The group’s vision is ‘to be the leading and driving voice for youth in the Commonwealth towards promoting best practices for sport, development and peace in their respective societies’. With advocacy and research underpinning the way the group will work, they have identified education, empowerment and peace building as the three thematic areas they will focus on in their attempt to advance development through sport in the Commonwealth. When utilised in appropriate ways, sport is a unique, engaging and critical tool which confronts inequality, encourages inclusive participation and provides multiple pathways of opportunity for young people. For that reason, the group will have the task of transforming into a wider network that draws on NGOs, government agencies, organisations from different sectors and young experts to help advance development through sport.

Sport is recognised by the group as a tool to put young people at the centre of sustainable development. It is this message that the Working group will take to key policy making forums in the Commonwealth, as part of a broader remit to contribute to the strengthening of SDP in the Commonwealth.

The Commonwealth Games 2014 will be held in Glasgow, Scotland. Apart from having an economic and social impact on the local communities, the games will be a hub for local SDP initiatives and provide an opportunity to bring those marginalised groups in from the dark and increase social cohesion.