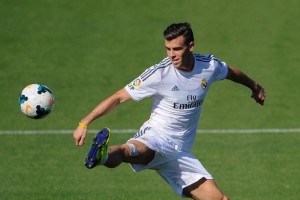 The world’s most expensive player was left out of Carlo Ancelotti’s 21-man squad for the match at the Santiago Bernabéu after training apart from his team-mates on Tuesday afternoon in the club’s gym.
A statement on the Real Madrid website confirmed Bale was struggling with a thigh problem and would undergo tests on Wednesday. Bale, 24, is out of today’s Champions League tie against FC Copenhagen and had further tests earlier today.
“Bale has been diagnosed with a muscle contracture in his left thigh. It remains to be seen how the condition develops,” says a Real Madrid statement.