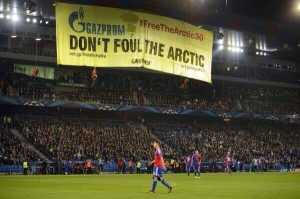 Tuesday evening’s UEFA Champions League match between FC Basel and FC Schalke 04 was temporarily halted after protesters came rappelling down onto St. Jakob-Park, sending the crowd into an uproar.
Greenpeace activists forced a stoppage in the tie between Basle and Schalke as they protested against the German club’s sponsor Gazprom. The match was stopped while the activists were removed from the stadium, but was restarted after order was restored.
The protest was focused on trying to stop Russian energy company Gazprom from polluting the Arctic, as well as the campaign by Greenpeace to free the 30 protesters who were put behind bars for a peaceful protest against dangerous oil drilling.
In a statement released by Greenpeace, the organisation said: “The Arctic is in danger: Gazprom wants to drill for oil in the icy waters. An oil spill is only a matter of time.”