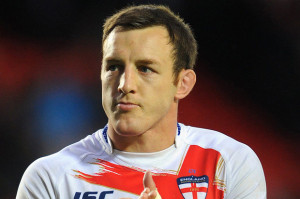 St Helens’ England international hooker James Roby who was sidelined for 10 weeks due to a second surgery in both of his ankles hopes to be part of England’s cup opener against Australia on October 26 after having made his return a month ago.

The 27-year-old 2007 Man of Steel winner is in South Africa for England’s high-altitude training camp with Saints not involved in last Saturday’s Grand Final, and the hard-working no 9 cannot wait to don the national jersey again.

“It’s just a good chance to be patriotic and represent your country, represent England and there’s nothing better than playing in a World Cup on home soil,” He told Skysports.com patriotically.