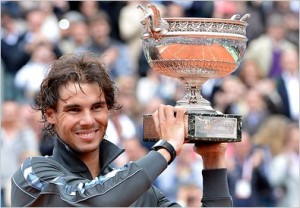 As you read a few moments ago on Africa Top Sports, Spaniard Rafael Nadal ranked N°1 in the world though he finished the China Open as runner-up to Novak Djokovic. This ranking of the player is secondary to his tremendous results on hard-court this season.

The player would become the first player to claim six ATP World Tour Masters title in one year if he manages to win the upcoming tournament in Shanghai (Shanghai Masters whose final he lost in 2009 to Nikolay Davydenko).

“I hope to be ready for Shanghai,”Nadal quoted in Beijing. “It’s an important tournament, one of the most important of the season because it’s a Masters 1000 – you need to play against best players even in the first rounds.”