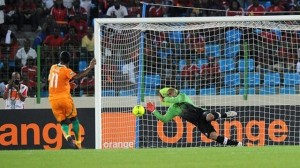 In addition to the interest they aroused and goals that were scored, the first two games of the World Cup 2014 Brazil African zone were also subject to penalties. In total, three were whistled over the two games, including two in the duel between the Stallions of Burkina Faso and the Desert Foxes of Algeria.

Côte d’ Ivoire opened the scoring against Senegal on a penalty in the 4th minute of play. A secondary to a penalty caused Senegalese Cheikhou Kouyaté on Gervinho. Didier Drogba did not hesitate. No doubt helped by his years of experience in football, he transforms the penalty and boilet the Felix Houphouet -Boigny stadium. 1-0 for Elephants.

Earlier in the match Algeria – Burkina Faso, the Stallions striker Aristide Bance has not had the same luck. He missed an important penalty awarded by the referee to his team at the end of the first half for a foul on Jonathan Pitroipa.

But on another whistle penalty for Burkina late in the game, Bancé take his courage in both hands to play again and scores, allowing Stallions to take advantage on the Desert Foxes. But this second penalty is not beyond reproach since he almost missed again.

Penalty: it is not enough to get them, they should be put in!

If Aristide Bance scored his first penalty, the score might have been 4-2. This would have enabled Burkina Faso to win with at least two goals ahead. This would not be a bad score considering the importance of the return match to be played in a little over a month in Algeria. At 3-2, the Desert Foxes still retain their chance of qualifying, while two goals could create more doubt in them. 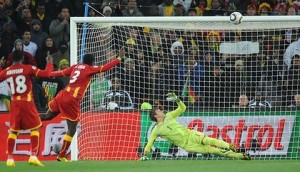 In a football game, one thing is to have penalty kicks, and another is to score them. This does not happen all the time, even in the most decisive meetings with players and considered stars. Some recent examples.

Remember Pierre Wome Nlend . He was considered as the responsible of the non -qualification of Cameroon for the 2006 World Cup by missing a penalty in the last minute of the last qualifying match against Egypt. Final score 1-1, while a victory would give the qualification to his country. Victim of threats, he refused to go to selection until his safety is again assured. 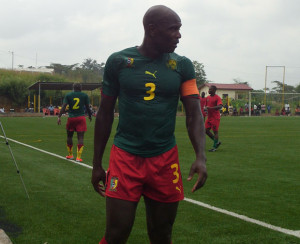 Another example. The Ghanaian Asamoah Gyan in the 2010 World Cup in South Africa. At the last second of extra quarter-final between Ghana and Uruguay, the former Rennes has the opportunity to send for the first time in history an African country in the semifinals of the World Cup. But Gyan missed the penalty and the Black Stars eventually lost on penalty shootouts.

And what about the missed penalty of Didier Drogba during the match in the final of the African Cup of Nations in 2012 against Zambia. A final the Elephants eventually lost on penalties against the Chipolopolo .

As seen, the penalty kicks are also a story of luck and sometimes you have to be very brave to shoot them.

For the short history, the record of missed penalty kicks in a game belongs to the Argentine Martin Palermo with 3 failed attempts in a game.

Video of the missed penalty of Asamoah Gyan during the World Cup against Uruguay.