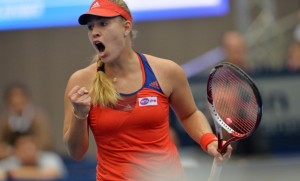 Top seed Angelique Kerber claimed her third WTA crown and the first of the year as she outclassed former World No.1 Ana Ivanovic in a roller-coaster championship clash at the Generali Ladies Linz on Sunday.

World No.10 Angelique Kerber defeated former two time Linz champion Ana Ivanovic earlier in the day to complete a dream week in Austria. It was a high intensity encounter that had many twists and tales as it was the German who opened up the duel with a series of winners from both wings. And, with her serve firing in all cylinders as well she found herself on the threshold of an easy win as she served for the match at 6-4, 5-4 and had three match points too at 40-0 in that game.

After the match Kerber stated that she was pleased with her performance against a tough competitor like Ivanovic, although she would have liked to win without that many problems: “At the end I was just focusing point to point and not thinking about the match points I already had. I was just trying to stay aggressive in the important moments and I think that was the biggest key to victory at the end. I’m really happy to win my first WTA tournament of the year here.”