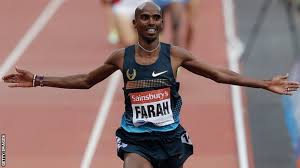 According to the double Olympic champion he can never run a marathon in under two hours. People like Lord Sebastian Coe said the goal is too ambitious for the athlete who plans to run the London Marathon in 2014.
“For me to say I can run under two hours is ridiculous.” Farah said
“My goals are to run the London Marathon and do the best that I can.”
Winner in Berlin in a time of 2:3.23 last month, the Kenyan Wilson Kipsang broke the marathon world record by 15 seconds.
“I think in years to come it is doable but not in the first marathon,” said Farah.
He added: “I enjoy my athletics and I want to take it as far as I can.”