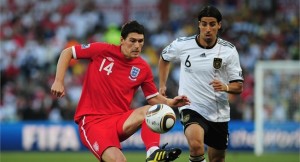 Wembley stadium will host both English and Germans in a friendly next month in their preparations for the Brazil 2014.
On November 19, Roy Hodgson’s men who had a 2-0 win over Poland had got their ticket for the World Cup in Brazil are going to face the three time World Champion.
Earlier in the same week, England will face Argentina or Australia before they host Denmark in March for another pre-World Cup game.
England have not played against Germany that qualified for the World Cup with an unbeaten record in group C, since their 4-1 defeat to them in the second round of the 2010 World Cup finals.
“I’ll use the next six or seven months to reflect,” Hodgson said. “There’ll be a lot of pressure on us, but this team is growing in accepting pressure.
“It sounded easy: two home matches, win them, no problems. But anyone involved in football knows it’s not as easy as that. The important thing for us is to keep working at our game.”