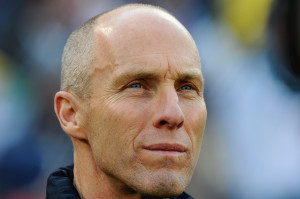 Egypt have already started looking for a replacement for coach Bob Bradley who led the Pharaohs to their biggest ever African defeat after their humiliating defeat to the Black Stars.
Are already mentioned as potential successors Hossam El-Badry and Egypt’s legendary striker Hossam Hossan.
Bradley was appointed in November 2011 to secure Egypt’s qualification for the World Cup, its first since 1990. His contract runs until the end of the qualifiers and Tuesday’s crushing defeat means his mission will be over after the second leg in Cairo on 19 November.
The Pharaohs will look for fresh blood to build a new team around the likes of flamboyant winger Mohamed Salah.