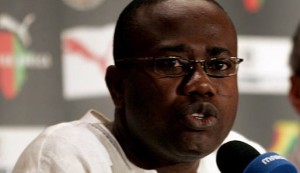 Ghana Football Association president Kwesi Nyantakyi has warned that the Black Stars are not yet in the World cup and has adviced Ghanaians to start focusing on the second leg in Egypt. The FA president said the away match will be more crucial than the home game and the FA is aware of that so they started planning for the second leg game immediately after the first leg.

“The FA started planning for the second leg immediately after the first leg,i will urge Ghanaians to take it as though we lost our home match and start praying for the team“, Nyantakyi said. “we definitely want to quality for the World Cup and the results from both home and away game will show who will qualify so we need to get fair results in Egypt or wherever the game will be played to qualify“.
The FA president added that he was amazed when he saw the Egypt fans used fire cracker  in the stadium because it is against the FA rules.”i dont know how the Egypt fans sneaked those fire crackers into the stadium because it is agaisnt our rules, if the  Egypt fans were able to sneak fire crackers into our stadium then i wonder what they can take to their stadium when we play in their country” Nyantakyi added.
The  game ended 6-1 in favour of the Black Stars.