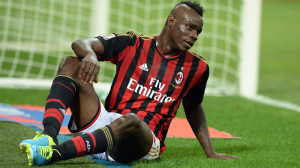 Mario Balotelli and Alessandre Florenzi who were the heroes of Italy after they reduced the score to offer the 2014 World Cup ticket to Italy in their match against Armenia returned to his club with a thigh injury, and may miss Saturday’s Serie A clash with Udinese and Tuesday’s Champions League fixture at San Siro.
“Mario Balotelli is suffering from a vastus intermedius muscle injury to the right thigh,” can we read on the club official website.
“The player will be monitored in the coming days in order to better define the extent of the problem and determine the prognosis.”
AC Milan will face Barcelona in the Champions League, a match that Super Mario may miss due to his injury.
Having missed Milan’s last three Leagues due to red card suspension has three Serie A goals in four games this season and two in the Champions League.

Barcelona superstar Lionel Messi after having gone through a thigh injury that occurred last month returned to training on Monday.