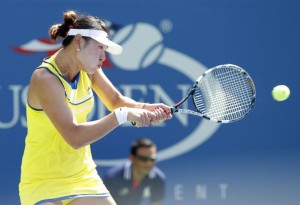 Duan Ying-Ying produced her best performance of the season to send top seed Kimiko Date-Krumm crashing out in the first round of the Nanjing Ladies Open on Tuesday.

Coming into the tournament, World No.181 Duan had lost her past three matches but flew out of the traps against Date-Krumm, breaking early on to establish a 3-1 lead.

These early inroads proved the difference in a first set where both players struggled to hold onto their serve. After taking the opener, Duan continued her dominance of the Date-Krumm delivery, breaking three more times as she calmly closed out a 63 62 win.