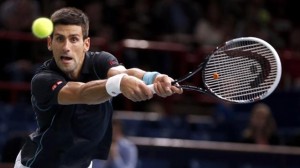 Former champion and the World No.2 Novak Djokovic weathered the early storm in his opener yesterday at the Paris Masters on Tuesday as he out-performed the French World N°189-ranked qualifier Pierre-Hugues Herbert to advance through to the third round of the competition on the day. The Serbian Express had to overcome the tough challenge of his rival particularly in the first set as he had to fend off a couple of set points in that one before going on a roll in the second.

Djokovic was on course for a bagel as he had taken a 5-0 lead before Herbert came back for the second time to delay the inevitable for two more games. Still, in the end Novak was too strong as he wrapped up a 7-6, 6-3 victory over him in an hour and 33 minutes.