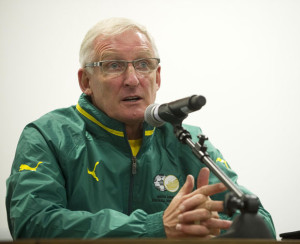 Bafana Bafana coach Gordon Igesund has announced a strong 24-man squad to face Swaziland in an international friendly match on 15 November at the National Stadium in the Swazi capital of Mbabane.

The match is scheduled to kick off at 20h30.

All the players selected for this encounter are local-based as this is part of the preparations for the upcoming CAF CHAN tournament that begins in January next year.

“This is the first game that we will play in preparation for the CHAN tournament and its very important for us to get the rhythm going in the team, because these are some of the players that will play in that event. It is as very formidable team and we have a pool of about 38 players who are all fighting to make the final 23 players for the tournament, so is it is very exciting and the match against Swaziland will be a good test for us,” said Igesund.