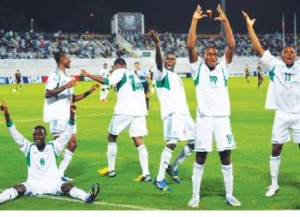 Good and assuring performances are always hailed and backed.
Globacom have backed the Golden Eaglets to beat their Swedish counterparts when both sides clash in the semi-finals of the Fifa U-17 World Cup.
The telecommunications giants, who are one of the major sponsors of Nigerian national teams, released a statement in which they firstly hailed the performance of the Eaglets in a 2-0 win over Uruguay in the quarter-finals of the competition and secondly urged the Nigerian youngsters to beat their challenger (Sweden) of the semi-finals.
“The Eaglets have shown that they are ready to achieve the ultimate goal.
“We wish to enjoin the team and their coaches not to relent in their effort to win the trophy by defeating Sweden on Tuesday to book the final ticket.”
Remember that Globacom named Nigeria’s international winger Victor Moses as their Brand Ambassador earlier in October.