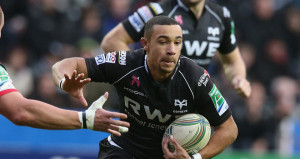 Ospreys wing Eli Walker will make his Wales debut in Saturday’s Millennium Stadium clash against the Springboks of South Africa.

The 21-year-old beat off competition from Liam Williams to take the place of Alex Cuthbert, who is ruled out with an ankle injury.

And Cardiff Blues lock Bradley Davies will partner Alun-Wyn Jones in the second row, with Luke Charteris having to settle for a place on the bench.

British & Irish Lions flanker Dan Lydiate will make his first appearance for Wales since the summer of 2012, having missed nearly a year’s international rugby because of injury.

Mike Phillips starts at scrum-half despite not currently having a club after he was sacked by Bayonne last week.

Walker – who would almost certainly have played in the 2013 Six Nations but for injury – is one of the deadliest finishers in the RaboDirect PRO12.

“Eli has impressed for his region and while with us, and it’s a great opportunity for him to make his mark in a very experienced side, “ Coach Warren Gatland said.