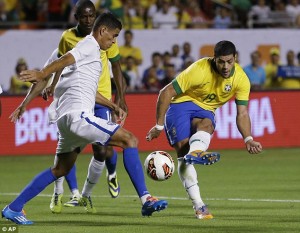 Brazil slaughtered Honduras 5-0 in an international friendly in Miami as preparation for the 2014 World Cup.

Honduras were punished for a defensive mistake in the 20th minute as Paulinho got the ball to set-up Bernard who beat Noel Valladares to score the opener.

Robinho made a return to Brazil for the first time in over two years when he came on as a substitute after half-time.

Brazil made it 2-0 after the break when Dante headed in a Neymar free-kick.

The next goal came about when Paulinho’s shot was saved by Valladares but Maicon scored from the rebound.

Hulk replaced Neymar and delivered the cross for Willian to score with a volley to make it 4-0.

Willian, Ramires and Robinho were all involved to set up Hulk to score the fifth goal with a close-range shot.

Brazil will try to do the same thing to Chile on Tuesday when they meet  in Toronto.