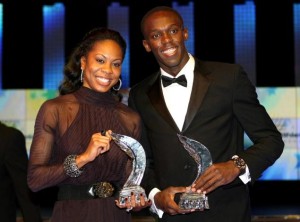 No surprise, king Bolt was again voted “Athlete of the Year” on Saturday in Monaco during the season end Gala of the IAAF (International Association of Athletics Federations ) . The Jamaican was ahead of Briton Mo Farah and Ukrainian Bondarenko.

This is the fifth time since 2008 that Bolt wins the trophy. “To beat me, you have to work hard, like me,” he said when asked about how to deprive him of the trophy. “In 2014, I will devote myself to the 200m. My dream is to go under 19”, but I do not think a year without a championship is the best for it. I have no idea of my schedule for next season. It is my coach who will decide and tell especially if I can take part or not in the first World relay in the late May. “

For the ladies, it’s Shelly -Ann Fraser, 27, who stole the show from New Zealand’s Valerie Adams and Czech Zuzana Hejnova. Triple world champion last August in Moscow on the same distances as Bolt, the Jamaican did not hide her joy:

“I am very honored with this award, but I do not think I’ll stop there. Moreover, the first thing I thought when I crossed the line in Moscow, is next year.”