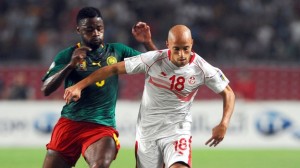 It is within a hot atmosphere that we just lived the first half between Cameroon and Tunisia. The Carthage Eagles had hardly breathed the air of the Ahmadou Ahidjo Stadium when Achille Webo enjoyed Haggui ‘s poor control to deceive Ben Cherifia.

The stadium explodes and Tunisian sounded. Cameroon has the ball in the first part and Assou-Ekotto misses the 2-0. But it is only a matter of minutes since at the 30th; Benjamin Moukandjo left alone in a series of dribbles clears three defenders before putting the ball inside the Tunisian goal. Already 2-0 while the men Rudd Krol are still not in their game.
The occasion for the Eagles is the head butt of Ben Youssef in the air on a free kick. Tunisians will have to show a better face in the second period.