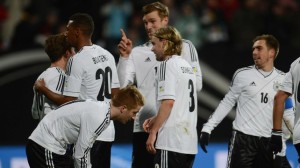 The result of the much anticipated international friendly matches between European football icons England and just fell Tuesday night at Wembley.
The fact that the men of coach Joachim Low of Germany were not at home did not prevent them from inflicting a slight 1-0 loss to the men of coach Roy Hodgson of England thanks to Per Mertesacker‘s towering header in the 39th minute.
This loss adds to the prior 2-0 loss of Wayne Rooney and co to Chile on Friday and become the first Englanders have suffered back-to-back home defeats since 1977.

But coach Hodgson admitted his side did not show the quality needed to overcome Germany.
“I thought it was a harsh defeat but we needed better quality, “Hodgson said:

“The quality of our passing and shooting was not as good as the Germans and we paid the price for set-pieces.

“We knew set-pieces would be a danger, they had some big players and we were a small team.”