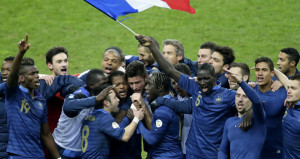 France produced a stunning comeback in their World Cup play-off against Ukraine, winning 3-0 in Paris to progress to the tournament with a 3-2 aggregate scoreline.

Mamadou Sakho opened the scoring and two erroneous offside decisions balanced each other out as Karim Benzema scored shortly after seeing another effort disallowed.

And after Ukraine had Yevhen Khacheridi sent off, an unfortunate own goal by their substitute Oleg Gusev completed a remarkable turnaround for Les Bleus, who were unrecognisable from their lacklustre showing in Kiev last Friday.