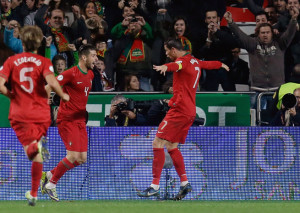 Cristiano Ronaldo scored a brilliant hat-trick to give Portugal a 3-2 win in Sweden and send them to the World Cup finals.

Portugal brought a 1-0 lead into their second leg in Solna and after a forgettable opening 45 minutes the game came to life in spectacular fashion with Ronaldo and Zlatan Ibrahimovic taking centre stage.

Cristiano Ronaldo scored a sensational hat-trick to send Portugal to the World Cup Finals.
Ronaldo opened the scoring on 50 minutes before Ibrahimovic then claimed a quick-fire brace to give the home side real hope with Portugal only leading on away goals.

But then Ronaldo took over as he claimed two more wonderful goals in two-minutes to kill off the tie and send Portugal to the World Cup finals next summer.