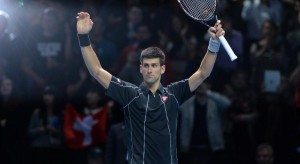 After having outclassed his Spanish No1-ranked counterpart Nafael Nadal two weeks ago at the ATP Tour Finals in London, Serb No 2-ranked tennis icon Novak Djokovic once again beat him today (Thursday) during an exhibition match played in Santiago, Chile.
Djokovic beat Nadal in straight sets with a 7-6(3) 6-4 scoreline in Santiago, Chile, as both players teamed-up to celebrate the retirement of former Olympic gold medalist Nicolas Massu.
The duo will play another exhibition match in Buenos Aires, Argentina on Sunday to mark the retirement of former top tenner David Nalbandian.