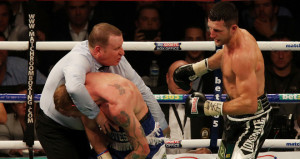 In a stunning start to the fight, Groves floored Froch heavily and was dominating the contest until the WBA and IBF champion hurt the challenger with a determined assault in the ninth.

Groves was on unsteady legs, but referee Howard Foster stepped in far too swiftly to signal the end of a thrilling super-middleweight clash.

Froch had struggled to cope with the younger man’s speed and appeared to be heading for defeat, with all three judges scoring the fight in Groves’ favour, before victory was snatched away in contentious fashion.
Groves revealed his game plan to Froch in the build-up and backed up his boasts by landing a lightning right hand in the opener.

Froch responded with a crisp punch of his own, but Groves oozed confidence and sent his foe tumbling to the canvas with another huge right hand.

The champion survived the frantic final few seconds, but looked sluggish in the second and Froch was shaken up by a short left hand.