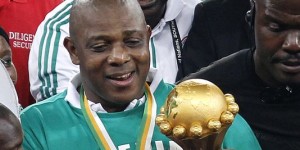 Super Eagles Coach, Stephen Keshi in this interview, tells Bamidele Boluwaji his target for the 2014 World Cup finals in Brazil.

Coach, let me start by congratulating you on the World Cup ticket…

Thank you very much, it was a victory for every Nigerian including the press who have always given their support to the team. I am also grateful to God who made it possible for us, it is a valuable ticket to me and the players.

How would you describe the Ethiopians despite beating them 2-0 to qualify for the 2014 FIFA World Cup in Brazil?

They are a very strong side who were really determined to go to the World Cup but unfortunately for them, they had to play us before that dream could be realised and that ended their dream. I knew this team right from the Nations Cup and I knew they were not going to be easy but we were lucky to have won the first leg match in Addis Ababa which really gave us the confidence we needed to win the return leg match in Calabar, so they are a quality side and I must praise the efforts of their coach for bringing out this set of players, I am sure that they will realise their dream of playing in the World Cup soon.

The Super Eagles did not play a really technical match that could make one to rate them above the Ethiopians in the match, was that the game plan?

Well,it may and it may not be, but the most important thing is that we won and we now have the World Cup ticket with us.Honestly,I will prefer to play badly and get the result than play well and lose the result but I understand what you are trying to say and we are going to work on that.

What were your major challenges before getting the World Cup ticket?

Yes, the major challenges we had in all the matches we played were knowing the team we were going to play technically and travelling factor, and I have to thank some of your colleagues who really helped in that area, some will call to give information about our opponents while some will call to give advice, I am really grateful for all that.

Looking at the attacking position, the strikers missed many scoring chances. What are you going to do to make sure that this does not repeat itself at the World Cup in Brazil?

The World Cup is a different ball game all together and I will like to tell you that we have taken notice of all the mistakes we made during the qualifiers and we will make sure we correct them before then.

Coach, we saw the way Kenneth Omeruo played in the match, does it mean he was not 100% fit before he was invited?

No,he is okay but probably he worked so hard in the match and for a player that is just coming out of injury, he needed to take the game easy.

Now that you have qualified for the World Cup, coach, are we going to see different players at the tournament?

No…No… this set of players have done well and we should just be praying that they are doing well in their various clubs and free of injury, though we are going to look at all the departments and see how we can make each of them better, but we are not saying that all these boys are going to be thrown out for players we do not know much or anything about.

What will be your target at the World Cup coach?

Like every coach, our target is to go there and do better than our previous performance and by extention, winning the trophy, which will gladden the heart of every Nigerian.Really, we will try our best.

Five countries will be representing the continent at the 2014World Cup, how do you intend to stand out from the crowd?

First, we need to prepare well and be prayerful for the players to be okay for the World Cup, secondly, the team needs the support of every Nigerian to achieve result and live up to expectations at the World Cup, as African champions, we will not disppoint in Brazil.

Finally, many young players are in your team, don’t you think that lack of World Cup experience could put pressure on them during the tournament in Brazil?