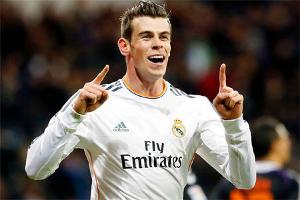 Gareth Bale scored his first hat-trick as a Real Madrid player and provided an assist as Carlo Ancelotti‘s side brushed aside Real Valladolid 4-0 at the Bernabeu on Saturday night.

With Cristiano Ronaldo still out nursing a thigh strain, it was left to the world’s most expensive player to spearhead Madrid’s attack. And the former Tottenham forward proved he was more than up to the task, scoring a header and with both feet to net a perfect hat-trick.

Bale headed in the first goal of the evening shortly after the half-hour mark and three minutes later provided a fine cross for Karim Benzema to add the second.

The 24-year old gave Madrid more breathing space 20 minutes into the second half by scoring the third goal with his right foot and in stoppage time completed his treble by knocking in a cross from Marcelo with his preferred left foot.

When the final whistle went he collected the match ball and took it to the centre circle, holding it aloft to salute the appreciative public. He has now scored eight goals in the last seven matches for the nine-time European Cup winners.