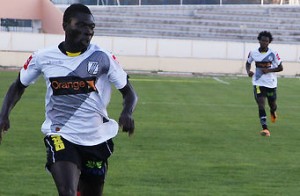 Following the fruitful performance the 23-year-old defender, Tunisia which earlier wished the service of the player in the Tunisian National team, increased pressure.

The Tinusian FA made proposals to the player over a change of nationality. However the player who at the beginning seemed to be convinced, just confided his change of mind to Ghanasoccernet.com.

He moreover says waiting for an eventual up-call from the Black Stars.

“Not again [about consideration to play for Tunisia] because I still believe one day Ghana will call me,” he told GHANAsoccernet.com.

This coronation may coast a Black Stars’ up-call for Konadu.

The defender became sad after beating Congo-based countrymen of Mazembe to lift the 2013 CAF Cup.