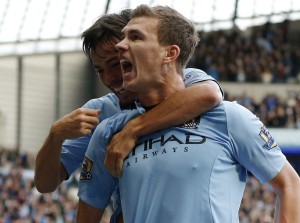 Bosnia-Herzegovina international striker Edin Dzeko of Manchester City who scored seven goals in 14 appearances in all competitions this season, has not yet started a Premier League game since the end of September due to the outstanding partnership between Sergio Aguero and summer signing Alvaro Negredo.
Facing this status of the player within the Citizens, speculations arose that the striker could be sold by Manchester City boss Manuel Pellegrini in the January transfer window.
However Pellegrini just dismissed any idea of selling out the 27-year-old player he still trusts.
“No, that is not the case [that Dzeko could be sold],” said Pellegrini.
“I put my trust in him before the season and I have just as much trust in him now.
“It is very important for this club to have a good squad because we have a lot of games to play from now until April and, if we want to win trophies, we need important players.
“Maybe at the moment he is not playing as much as he would like, but he remains an important part of the squad.”