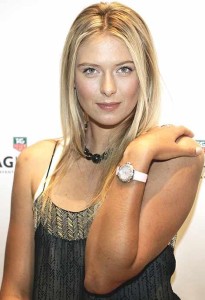 After having revealed the secret behind her craziness for fashion, Russian diva Maria Sharapova says she is not likely to receive gifts of any kind as she likes gifts with meaning rather than intentional gifts from guys.
The soul mate of Bulgarian tennis star Grigor Dimitrov said she is not the easiest person to shop for though she likes to be offered gifts.
“I love art and jewellery, but I am not the easiest person to shop for. I like gifts with meaning, something with a story behind it. That is always a bit more relevant and it is also safe – especially when it comes from a guy,” the superstar said.
Maria did not however fail to give a palpable example of what she calls meaningful gift by illustrating the beautiful watch Tag Heuer offered her after her French Open coronation. A watch on which all her four Grand Slams were engraved.
“Now I like accessories: shoes, bags, watches. I have a lot of men’s watches in my collection, more than women’s watches. I have worked with Tag Heuer for many years, so I have quite a big collection from them. They made a really special one for me last year when I won the French Open. They engraved all four of my Grand Slams on the watch, so the dial just has a 1-2-3-4. It’s really beautiful.”