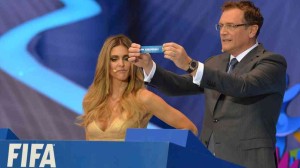 The draw for the 2014 World Cup has been made in Brazil. And it is Ghana which is housed in the worse group alongside Germany which stopped them in the 2010 World Cup in South Africa ( 0-1) , Portugal of Cristiano Ronaldo and the United States.

Algeria is doing pretty well with Belgium, Russia and South Korea. The Desert Foxes will still have to be done.

Côte d’ Ivoire will have to challenge Japan, Colombia of Falcao and Greece.

Cameroon will have to overcome Brazil, Croatia and Mexico in Group A;

France is doing very well with the Switzerland, Ecuador and Honduras.