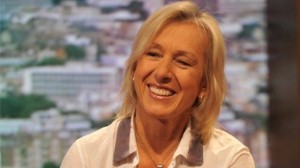 Legendary tennis star Martina Navratilova hit out at the International Olympic Committee for not taking an action ahead of the Sochi Winter Olympics, which will be held in February in Russia, a country which has earned the ire of gay activists and critics for showing discrimination towards homosexuals.

The openly gay tennis legend lashed out at the IOC on Tuesday, slamming the Olympic body of “putting their head in the sand” over gay rights. Speaking at the United Nations office in New York, she also took a jab at Qatar, which will host football World Cup in 2022.

Navratilova looked particularly upset when she talked about IOC’s inaction ahead of the Sochi Winter Olympics.
“In Qatar for example, where the World Cup is going to be, homosexual activity is punishable by jail terms,” said Navratilova.

“My disappointment is with the IOC for really putting their head in the sand and not wanting to make any waves… I think the IOC needs to stand up better for their athletes, quite frankly.”