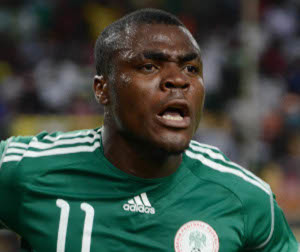 Africa Top Sports did not fail to let football fans know that African champions Nigeria have been drawn up alongside former foe Argentina, Bosnia-Herzegovina and Iran in the Fifa 2014 World Cup Group F.
While Nigerians are wondering on what strategy to adopt in order to perform a high class soccer against the inescapable Lionel Messi and co who seem to have raised more fears for Super Eagles, here is a brave man who asks his countrymen to count on him in the competition.
The Turkish-based Eagles striker Emmanuel Emenike has just told BBC Sports that his success will not be limited to club but also will make an imprint on the upcoming World Cup in Brazil.
“Next year will be a big one for the Super Eagles because the World Cup is football’s biggest stage,” Emenike said.

“Brazil is that place where I hope to make my mark and prove myself as a striker that can perform at major tournaments. I will be doing everything for the team as usual. I am confident as a team Nigeria will be stronger in Brazil,” he added.
Emenike was joint top scorer in the recent African Cup of Nations which they completed as champions.