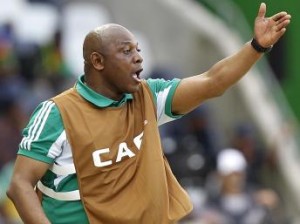 Nigeria national senior team Coach Stephen Keshi also in charge of the Super Eagles’ local based team set to take part in next year’s African Nations Championship in South Africa, sets up strategies to lead players safe and sound at the tourney.

Being aware primarily of the lack of for time his men to contest satisfactory number of friendlies, Keshi tried hard to make them dispute a victorious 4-1 friendly against Prisons FC of Abuja before setting an appointment with Niger Tornadoes tomorrow (Wednesday).

A high class soccer game against Lobi Stars on Saturday will be the third friendly fixture.
Keshi however thinks that concatenating friendlies could also cause harm to players and consequently lead to poor fitness in the tourney.
“We have to be cautious not to push the players too hard so that nobody will break down”, Keshi said.