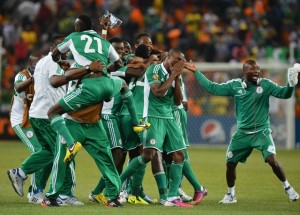 Home-based Super Eagles of Coach Stephen Keshi undertook warm-up fixtures ahead of African Nations Championships to be held in South Africa from January 11 to February 1.
Aware of lack of time for his men to accomplish satisfactory friendlies ahead of the competition, Keshi set a planning of three build-ups before Eagles land in the Rainbow Nation next year.
After hooking a successful first encounter by inflicting a ruthless 4-1 defeat to Prisons FC, the following victim of the Eagles supremacy was the Niger Tornadoes who just suffered not over a 2-0 loss yesterday (Wednesday) in Abuja.
The game was witnessed by a sparse crowd that included NFF’s Director of Technical, Dr Emmanuel Ikpeme and Barnabas Imenger.

Lobi Stars are the next side set to challenge Eagles on Saturday.

However Keshi believed that pushing the players too hard will not favor a successful competition.