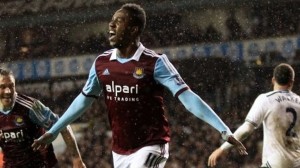 We almost forget that West Ham eliminated Tottenham from the English League Cup.

The explosive comeback of Emmanuel Adebayor has overshadowed the qualification Hammers Wednesday. Yet it is another son of the continent that sent the team of Sam Allardyce in the next round of the competition.

Having entered as a second-half substitute while his team was led 0-1, Modibo Maiga participated firstly in the restoration of parity by Matt Jarvis before putting in the winning goal himself.
The Malian outclassed Spurs defenders before playing a trick on the French goalkeeper Hugo Lloris.
Togo’s Emmanuel Adebayor is author of the sole strike of the Hotspurs who can say “bye bye” to the English League Cup.