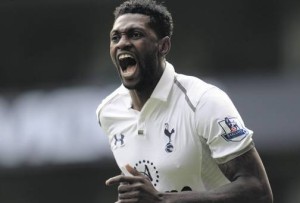 He has not missed his return with Tottenham. Emmanuel Adebayor proved he was still a player of exceptional class Wednesday in the English League Cup.

Tenured for the first time this season against West Ham, the Togolese striker was in all the right moves.

The Togolese star scored a beautiful goal for Spurs. At the reception of a swing from the left side of Jermaine Defoe (his attack accomplice of the day), Adebayor tricked Adrian. Joy is also demonstrative and illustrative particularly for a player plastered since the beginning of the season.
Out in the 78th minute, Adebayor can only see the defeat of his team from the bench. Matt Jarvis equalized before Modibo Maiga from Mali gives victory to the Hammers. Tottenham is eliminated from the League Cup.