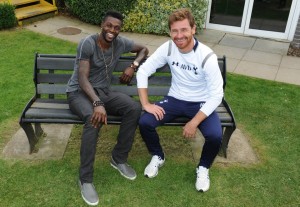 The first goal of Emmanuel Adebayor for his first start with the Spurs this season touched the now ex- coach of Tottenham.

Sacked after the crushing defeat of Spurs (0-5) against Liverpool, Andre Villas Boas defends himself after the goal of the Togolese international against West Ham in the Cup.

The Portuguese coach says he did not want to recruit four of the seven current players of his workforce.

The Daily Mail quoted names such as Erik Lamela , Nacer Chadli , Vlad Chiriches and Christian Eriksen. The four players have cost 60 million Euros to Tottenham. According to AVB, the 4 Spurs are choices of President Daniel Levy and sporting director Franco Baldini.

The former Chelsea coach said he wished to enlist the services of Hulk, Joao Moutinho and David Villa with the money of Gareth Bale.

He did not however venture on the position of the Togolese captain.